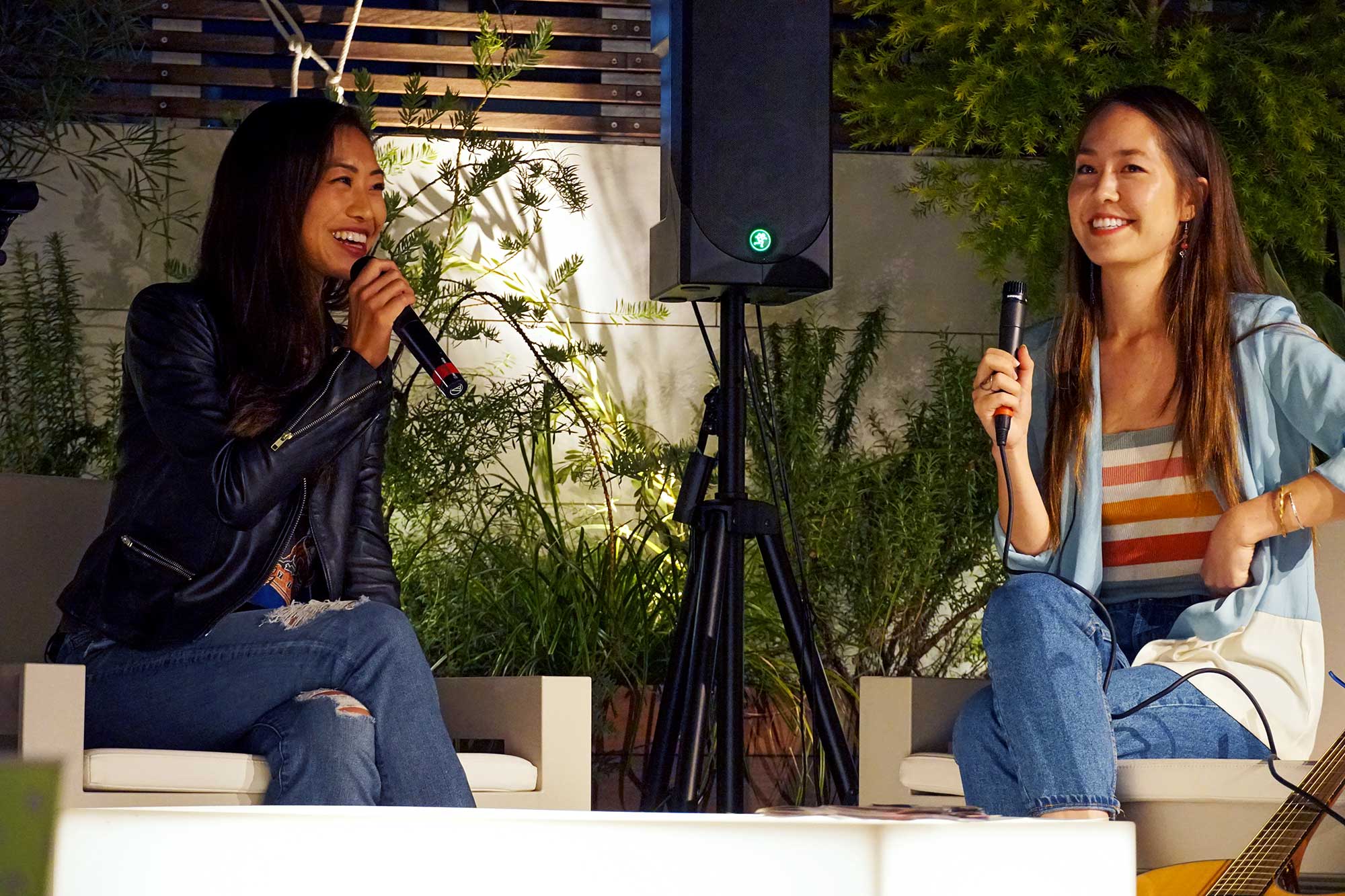 Getting to know more about this songwriter/singer living, working, and discovering her music in Japan.

I read on your website that you first came to Japan as an English teacher, but now you’re a full-time musician in Tokyo. How did that happen?

I started playing open mics a few months into living here, but I really had to work myself up to it cause I was very stage-shy [haha], and then started playing shows and meeting more musicians/bands, and then mainly through live shows and connections with other musicians I started getting paid gigs and being invited to session sing. One big “break” was when I was playing at a jam session and about a week later I got a message from another singer who was doing it full time and she offered to set me up with agencies who place singers in commercial and tv projects, so that gave me a big boost, and was also extraordinarily generous because she sought me out to help me even though we’d presumably be going for the same jobs. 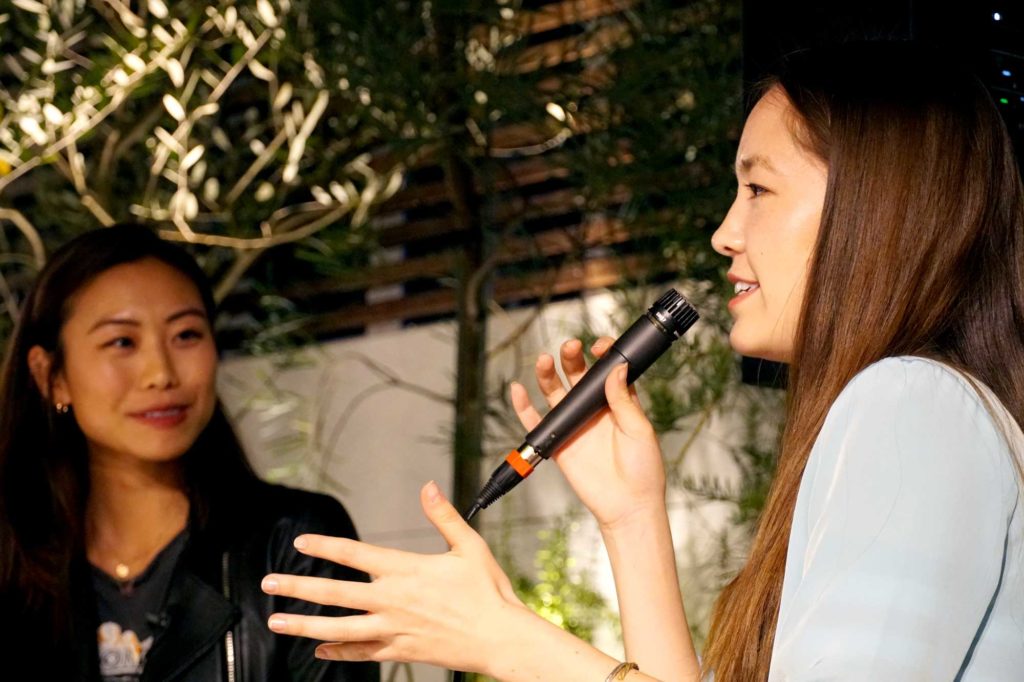 Anyway, since then it’s been a lot of sources of work and a combination of live shows and recordings and lyric writing and some narration and private music lessons that all string together to support me. The common thread is that things end up coming from the people you know and the community, like a friend of a friend who’s looking for a guitar teacher or an acquaintance who wants you to open a show for them or a relative stranger who emails you out of the blue to offer a connection with her singing agencies. So that’s why I’m so on board with the emphasis on community building at this event [ON-1 Vol. 5] because I think it’s overall the number 1 thing that facilitates art being generated/shared and helps propel artists/art from their bedrooms into the public space.

If you were to describe the genre or the type of music you write / create, how would you describe it?

My songs are generally very personal and meditative in content/tone as far as the lyrics and story go, and musically I compose on my acoustic guitar in a quiet private space so that usually comes out as kind of an organic, folky sound. 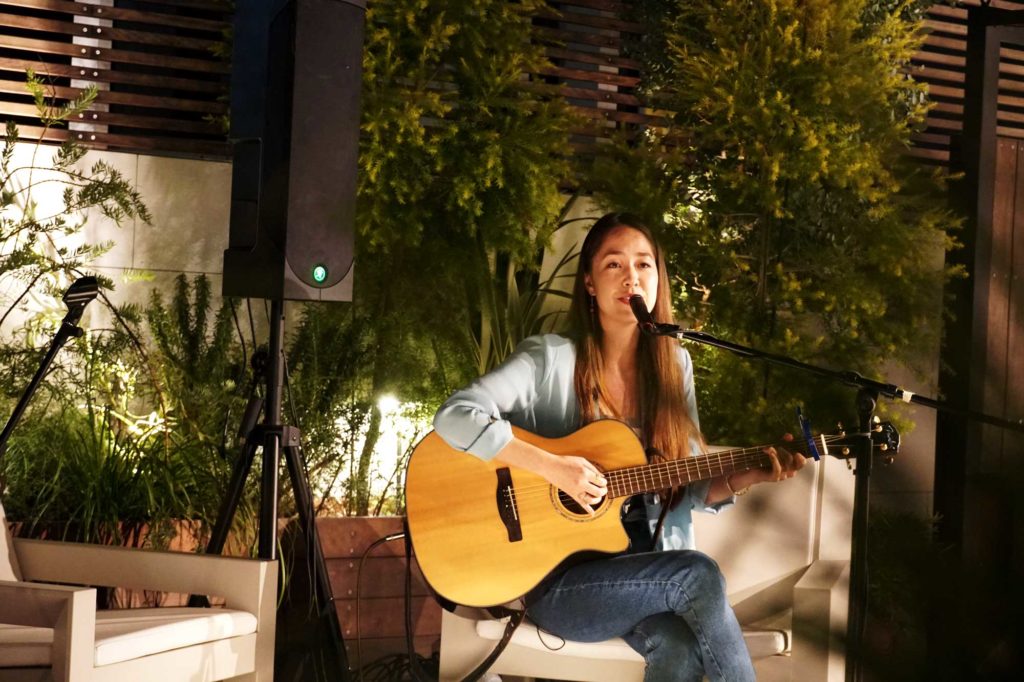 I’ve also been influenced by playing so many live gigs solo, where I wanted to beef up the sonic aspects to move beyond just an acoustic and voice, which is why I brought in my loop/effects pedal to my live set.

Where do you get your inspirations for your music?

I think my music sounds very American, so I guess I pull a lot from blues or folk or American pop, but these days I don’t often try to emulate a certain sound or artist, which I think I did more when I first started. Although sometimes I’ll hear a great song and it will trigger this desire in me to make something that reminds me of it in some secondary way rather than just copying what the song is. As far as content, I started writing as kind of a therapeutic process when I was a teenager, to explore and express what I was feeling and thinking in a safe space, so I still write in that way drawing largely from personal experiences and from powerful emotions or big concepts that I don’t feel satisfied expressing just in words or actions alone.

What do you hope to achieve with your musical career? What drives you to write / create music?

I guess songwriting has always been about wanting to be able to really connect to life or an emotion or something meaningful that happened to me or someone I know. So once I started sharing what I wrote I realized that other people can connect to your own songs with the same intensity as you can, and it’s possible for other people to connect to life and their emotions and their experiences through the music you create. So I want to be able to create opportunities for people to listen and really feel something, or connect to a memory, or feel like they’re recognized because they’ve had the same kind of experience or feeling. 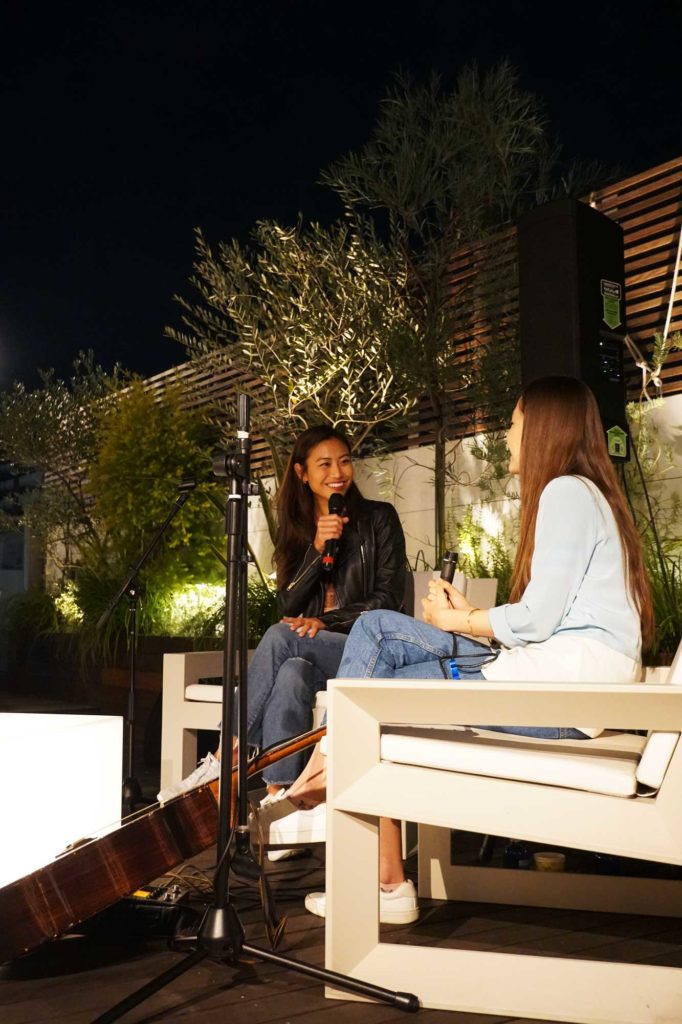 If I can create those moments I think that’s the best feeling in the world and I can feel like I’m giving something back to the world, because even if no one was listening, I’d want to write songs for myself anyway. But if I can share them and make a difference in someone’s life, that’s amazing.

As far as more tangible goals, I’d love to have a very broad career where I can make my own music and sell it and go on tour and stuff, but I’d also love to write for other people, I’d love to get into producing, I’d love to help build more gender equality in the music business by empowering other female artists and maybe one day have some sort of all-female label or studio or something like that. 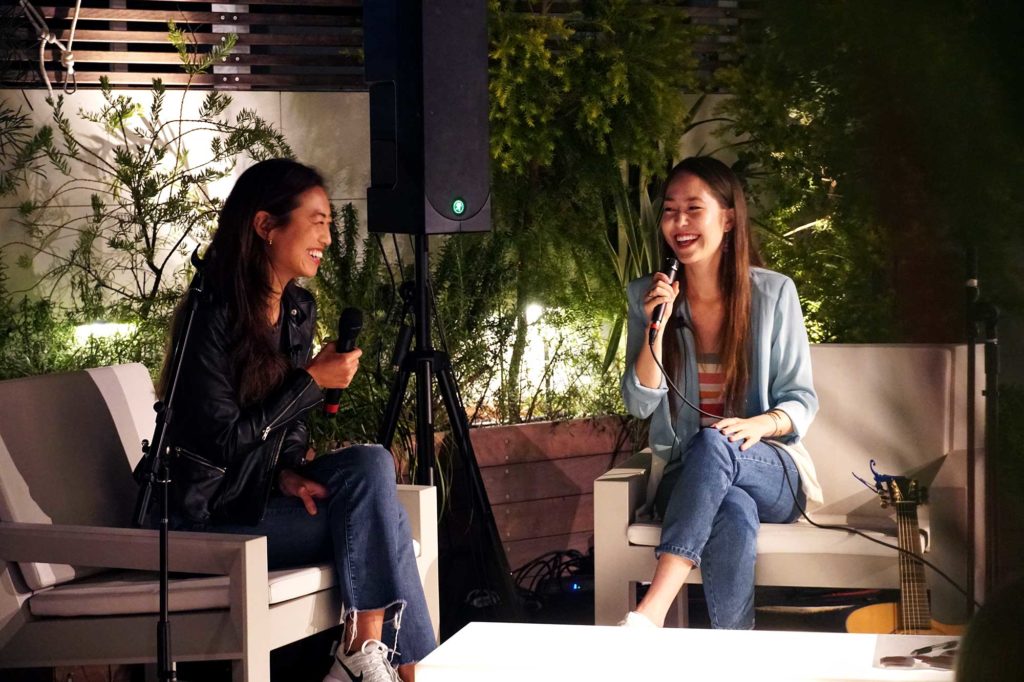 Toughest challenge you’ve faced as a singer song writer. Your career path. In contrast, what is the most rewarding thing?

Honestly the biggest enemy is self-doubt and lack of direction. I think on so many levels we get in our own way as artists or as people, whether it’s by thinking we’re not good enough so we don’t shoot for something we really want, or as a writer we self monitor and edit before we can even finish a song. So I think understanding that doubt will be there no matter what and that’s normal but you don’t always have to listen to it, has been a big challenge and is still something I struggle with.

The most rewarding thing is getting the chance to feel like I’m integrating my passions and my dreams into my daily life, and that it also may make the world a better place and give something useful to the world. I think many of us want so badly to be able to be fully happy where we are and there are times in life where we’re working really hard for something that we picture in the future, but we may not feel like where we are at the moment is where we’re really meant to be. Or we’re waiting for the next thing to make us happy, but I feel really lucky to feel like doing what I want to be doing and what I should be doing and I’m very happy and content on a daily basis. 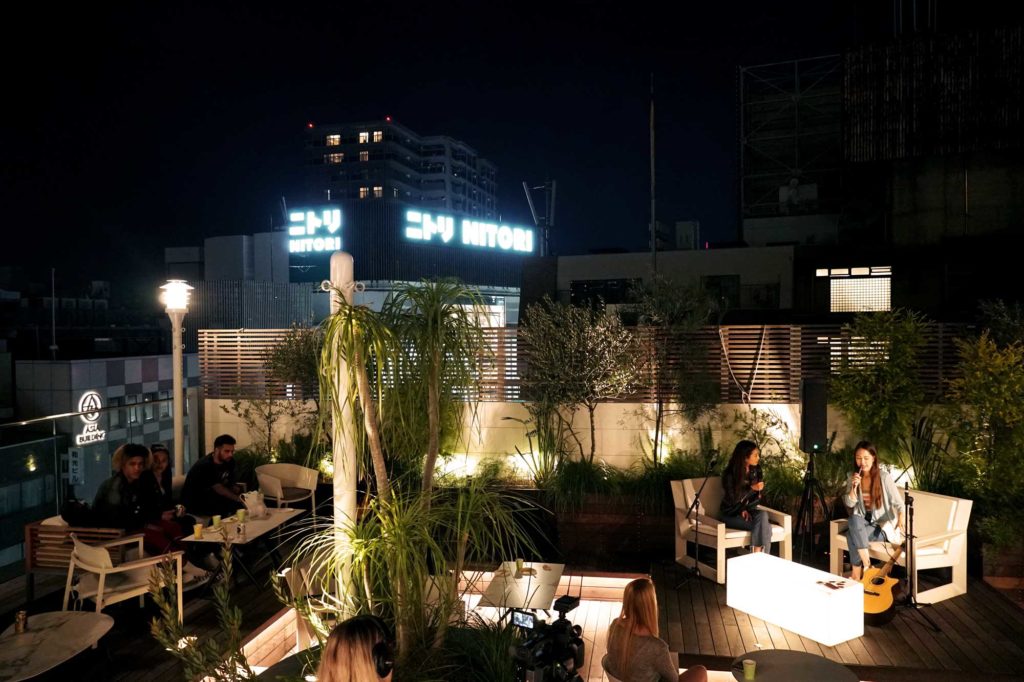 What is Tokyo like for creatives? Is there a good community? What do you wish there was more of?

I think the community of people I’ve met is incredibly supportive and positive. I don’t think people feel competitive or feel the need to cut each other down, I think the general vibe is we all want each other to succeed and we want to be able to share our art and share moments together.

I wish there was more room in the music industry for mid level indie bands, because I think there’s kind of a polarization between the big labels and their highly controlled popular music, and the underground independent artist that are making great music. I don’t see much opportunity for bands or musicians that don’t slot into the really mainstream thing to really be supported by a label and to be able to be working full-time on their music. So I’d love to see more opportunities for independent artists and less mainstream music to thrive and be supported. I think Groups like ON-1 are a great step to facilitating that kind of support while still allowing artist to really be original and creative, outside of the kind of Cookie-cutter model of big labels.

What is your favorite part about living in Tokyo? Do you hope to move back to California one day?

I love the ease of living in Tokyo and I love the mystery. It feels like there are infinite places to go and people to meet. There’s always something to do any time of the day or night.

I love that people have great style too! I remember being kind of unimpressed by the physical look of the city because most of the buildings are kind of grey and functional and kind of bland, but people really dress well and that gives color and style and texture to the city!

I will definitely find my way back to California sooner or later (I even have a song about that feeling called California haha!) It’s where my family is from and where I have always pictured ending up. It’s pretty hard to imagine a better place to raise a family!

What is something about you that even your closest friends don’t know about?

Something many people don’t know about me is that I have a secret instagram account dedicated to manhole covers! It sounds pretty weird haha, but if you look at the ground here there are sooo many different kinds of manholes and it became this kind of project after I realized I had a collection of pictures from when I happened upon cool ones. So I started being purposeful about looking for them and I’ve become pretty obsessed haha!

Every city has their own and there are also just so many artfully designed ones. It’s a fun alternative way for me to catalog my urban life and the different usually unnoticed things we encounter on a daily basis. 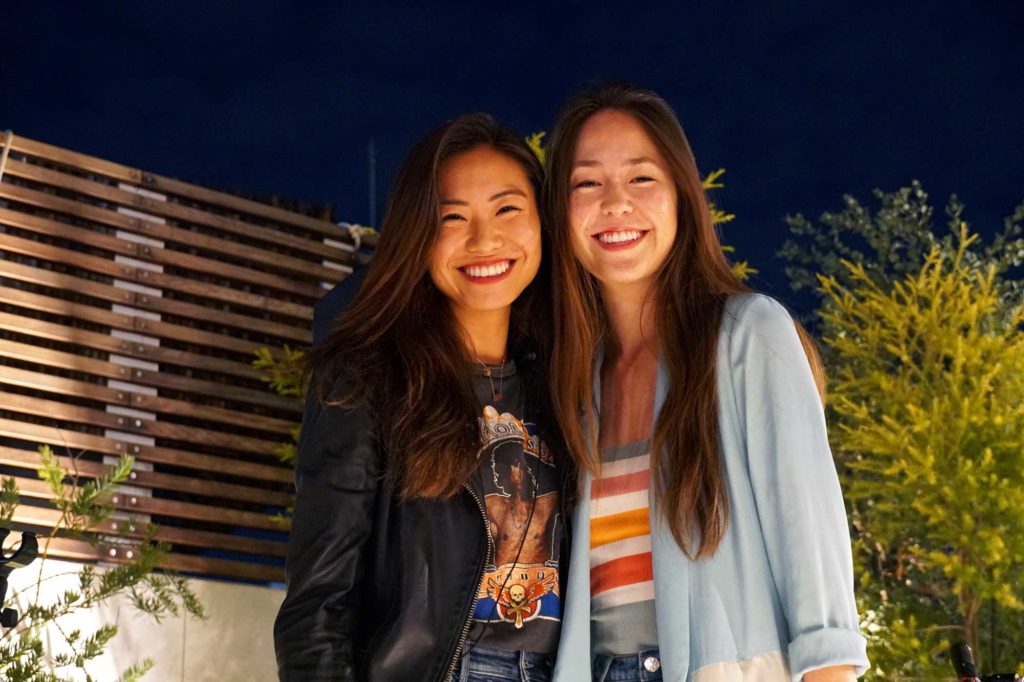