When creating your artwork, is there something you focus on? Do you have a universal theme connecting your art pieces?

The concept of this piece is SKINSHIP BURNY. This is a metaphor for the concept I call “adult children,” which are adults who experience various emotional complications due to growing up in a broken family during their childhood.

Much of my artwork, which are drawings and paintings, is interactive as possible; sometimes involving the participation of others. I do this because I myself am an “adult children.”

In the past, I held an exhibition in Shibuya both themed around “adult children.” One was about a sock that lost its other pair and it searches for its other half through konkatsu (movement in Japan to find your marriage partner) and gets married. The other art show piece I did was titled “Peeking telephone club,” where two strangers, male and female, have a conversation via a cellphone setup inside a box that I made. The conversation is picked up by a sampling machine and this conversation was replayed as an art piece.

Both of these ideas use items and concepts that are familiar to us in our day to day lives. This is something that is unique to these pieces. 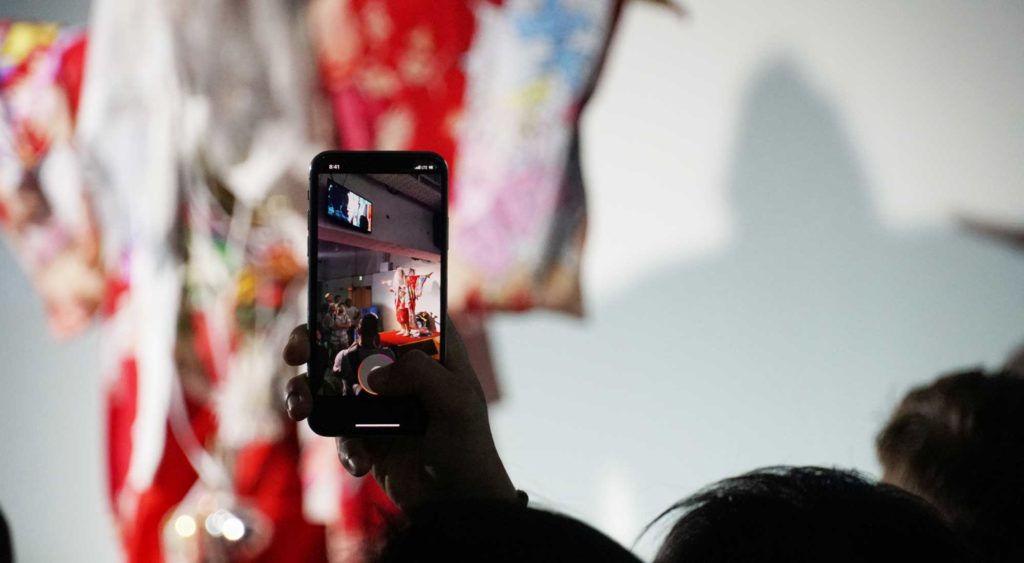 Why did you launch the YUKATA & MATSURI project? Can you tell us a bit more about the significance of this project?

One day I heard someone say, “I am afraid of getting hurt, so I will not date or love others,” and I immediately thought, “Japan’s future is in danger.”

This is a representation of the lack of self confidence, which comes from the weakening of the love they receive and give towards others (of course, not everyone is like this).

In Japan, culturally there is an unspoken message of the saying, iwazutomo katare, which translates to “things are better left unsaid.” Since this is deeply ingrained in our society, the outward expression of love is also often times “left unsaid.” Some examples include, parents not outwardly telling their kids that they love them, lack of touch or skinship, inability to respect and acknowledge differences, etc. 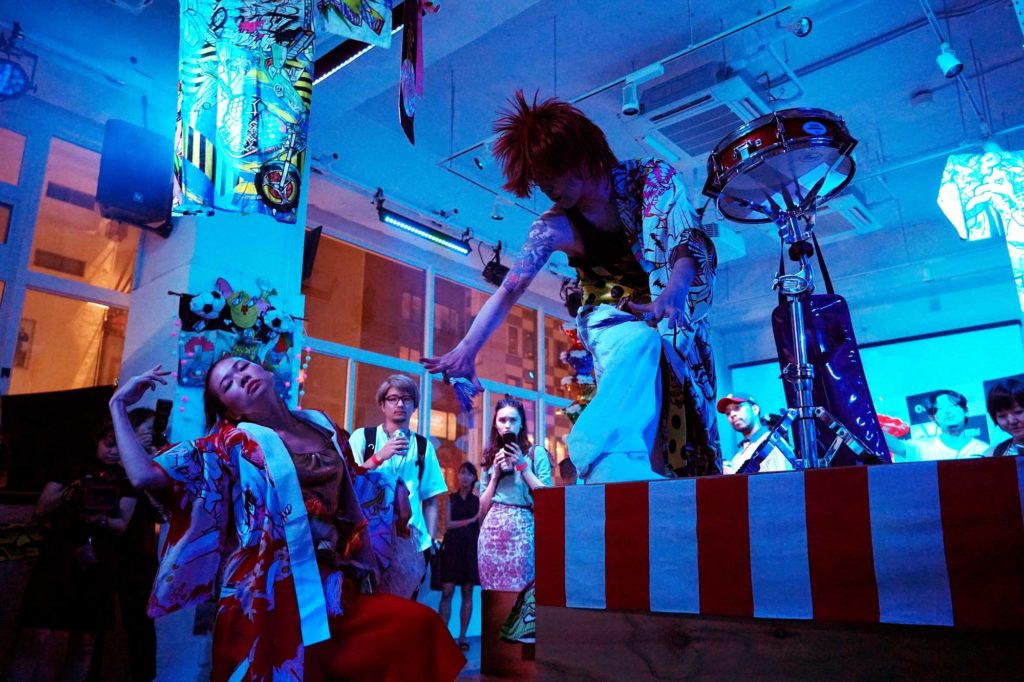 Not only this, many adults are embarrassed of displaying romantic forms of love between men and women in front of children, especially in public. I think this is a problem. There are probably many Japanese who find seeing their own parents kissing to be disgusting.

People forget that the sole reason why they exist is because of the love that existed between your mother and father. Since this is the case, even when children grow up to get married, they separate marriage (the reality) from love (something to hide / be embarrassed of), resulting in marital problems that exist widely in Japan.

In the past, many Japanese would go to matsuri’s, dance, and fall in love. Instead of thinking about all the 100 things we tend to think of, I thought why not have people put down their phones and dance like there is no tomorrow. That is more true to our nature and this is where the idea for the MATSURI & YUKATA project came from.

What do you want your audiences to take away from your artwork?

I want to disrupt and destroy all existing stereotypes or fixed ideas.

I, personally, have projected stereotypes on others as well as on myself. I “should” be doing this, artists “should” act like this, etc.

For this project, people who love yukatas and kimonos might disapprove of my artwork because there is a certain “way” these things should be portrayed. However, as an artist, there is a specific message I want to convey and at times, I will use cultural artifacts to do so. 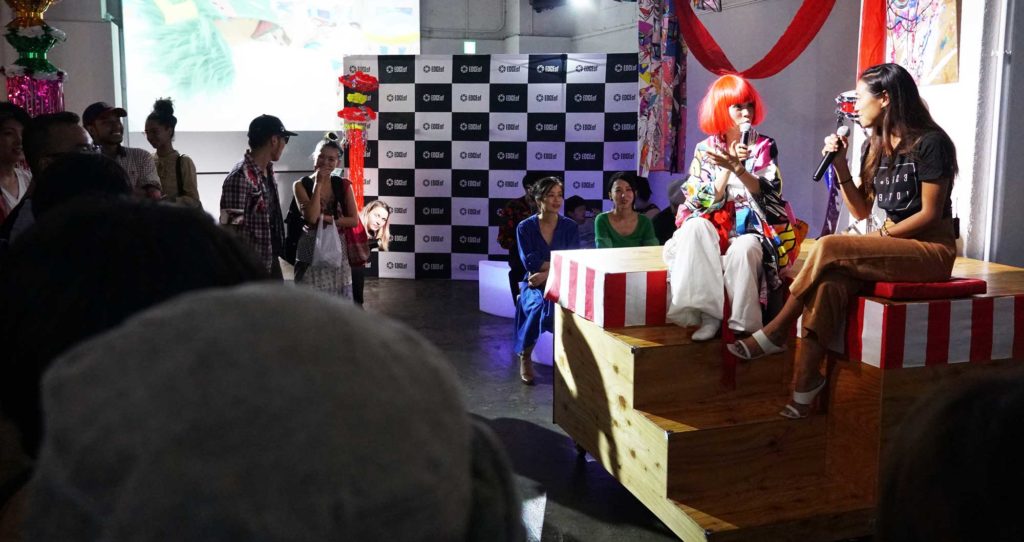 I have a clear goal in mind when creating my artwork and this does not mean I am disrespecting the Japanese culture. When you are trying to convey a message, bring about change, or start a movement, there are always going to be people who object or disagree. But I have learned what is most important is to not be afraid of these objections or headwind. This is a policy I try to always abide by.

What is the origin of the name “ShojonoTomo”?

I have capitalized “S” and “T” and there is no space in between Shojono and Tomo. It is one word. When I had my own gallery, I had to quickly come up with a pen name for myself and since my first name is TOMOKO, I combined that with a book titled “Shojo no Tomo” published in 1908. It was kind of a joke.

Afterwards, I saw my name translated to “YOUNG GIRL FRIEND” in an English magazine I was interviewed in. I laughed because the “Tomo” comes from my own name, not from the word tomo, or friends. However, I began to create artwork themed around the concept “adult children” from which I derived the term, “inner child,” which I interpret to mean, soul that is hurting from childhood.

Learning this, I later realized that “YOUNG GIRL FRIEND” points to “the young girl who resides inside me.”

Simply put, what is art to you?

Right now, art is an act that is necessary for me to live.

There might be more projects I want to work on with the concept, “adult children,” utilizing my own personal experiences. However, that and art are not necessarily synonymous to me.

Find out more about ShojonoTomo at her homepage here [ link ]

The “Craft Talk Session” is a 15-20 minute discussion based interview that includes a music performance of the artist, led by Miyu Fujita [ link ]. The objective is to give artists a chance to tell more about their story and share their journey and vision moving forward.